How a company brought ex-rugby league superstars together as part of a business networking event.

The absence of live sporting events during the global pandemic has been strongly felt by sports stars and fans alike. It’s forced brands and sporting associations to completely redefine how they generate revenue, appease sponsors, and maintain fan engagement. As a result, clubs, leagues and teams have embraced new video opportunities by thinking creatively about combining online and offline elements in a meaningful way that connects with consumers. These include offering people interactive and immersive experiences that allow fans closer than ever access to their sporting idols while empowering them to feel more involved in the action.

Here’s a brilliant example: I was recently at an Australian business meet-and-greet where a company had the ingenious idea of leveraging the latest video technology to bring legendary ex-rugby league players and fans together as part of an evening’s sporting entertainment.

In the wake of COVID-19, millions of businesses have had to think, act and run their companies differently, and as such, it’s changing how they communicate in business going forward.

To attract customers and partners, the company invited a select number of people to attend a networking food and drinks VIP event at the historic North Sydney Oval sports stadium for a rugby league fixture between the North Sydney Bears and Western Suburbs Magpies. With a virtual panel comprising three elite Bears rugby veterans hosted by major Australian commercial television network Channel 9, the past players, representatives from the NRL (National Rugby League) community and fans were able to hang out with each other like never before. Besides a pre-match discussion, the evening included watching and commenting on the game itself, then socializing and sharing stories face-to-face and virtually afterwards. The event proved to be a resounding success, judging from the happy reactions of everyone there.

“This is a great example of getting three ambassadors of the sport together in the room remotely. One was in Brisbane, the other on the Gold Coast and another in New South Wales,” said Billy Moore, former rugby league star. “The ability to bridge the distance yet still have that intimate audio-visual experience is an amazing thing.”

Creating a greater sense of humility

Video is proving to be a gamechanger throughout the sports industry – and indeed entertainment events more broadly – as for a start, it’s created a greater sense of humility among celebrities. It’s leveled the playing field in that regardless of status, people have realized we’re all just human. Unlike before, when sports stars or other high-profile personalities seemed detached, talking into a microphone or camera while being interviewed by journalists or media, they now get to engage with an audience directly, thanks to live streaming video technology giving them instant access to their fans and others. As for the fans themselves, rather than just seeing their sporting idols appear on TV and out of reach, they now get the chance to forge a deeper human connection with them on an almost one to one basis.

If there’s a silver lining to how the pandemic has affected live sports, it’s this: Similar to the North Sydney Bears occasion, video technology has begun inspiring companies to dream up all kinds of innovative ways to dynamically introduce and connect people physically and virtually through their favorite sports to drum up business. What’s more, as video’s become so lifelike, people don’t even have to leave their home to participate in virtually enabled sporting events. Although it’ll never fully replace the atmosphere of being in a stadium, nowadays, many prefer to watch sports from the comfort of their couch because they can see everything more clearly, close-up and personal, instead of being at the venue. Video gives them a sense of actually being there, mutually experiencing things with those present and getting totally absorbed in the moment.

The Bears business networking event brought sports stars and fans together via Zoom, amplifying the experience further by combining it with Neat Board, our Red Dot Award-winning 65-inch high-definition all-in-one device. For more info about Neat devices, visit neat.no. 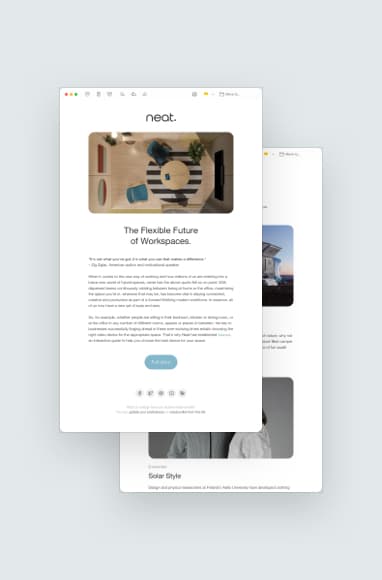